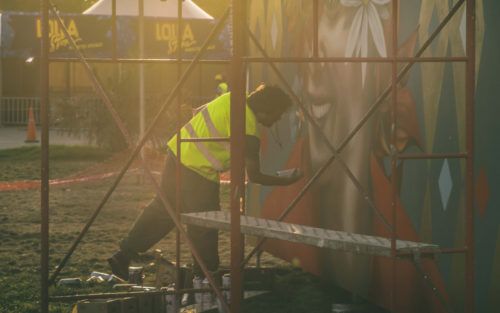 He was born in Santiago, 1980.  A self-educated graffitist and painter, designer by training, he started getting involved in painting by the mid-90s.  He has exhibited his painting in traditional format and graffiti in Chile, Bolivia, Brazil, USA, France, Germany, among others.  His first individual exhibition was at “MAVUT, Museum of Visual Arts”, Universidad de Talca.  In 2017 he made one of his most important murals, “The dream of flying”, at the Metro Line 6 Cerrillos Station. His main collective exhibits have been at “CCU Art Gallery”, “MUCH, Museo de la Chilenidad”, “Matilha Cultural Center” (Brazil), “MuBE Museum” (Brazil), and “Nord Art” (Büdelsdorf, Germany), among others.

He is a part of several publications on street art studies, such as “Canned Dreams” by Griselda Figueroa, “Citizenship, Participation, and Culture” by Sergio Rojas, co-author of “The Pardepes graffiti book”, and editor of the book “Marches – stares of a citizen movement”.  The latter ones are the result of a deep interest in how citizens again occupy public spaces to express themselves.

The following stand out from his exhibitions:

ABOUT THE {REMINISCENCES FROM 1980} EXHIBITION

Discovering the detail of light, what’s left of the shadow, the simplicity of living is what lasts, just as a picture captures the image, the instant of happiness, a painting reflects the landscapes of our moments, so many times on hold, up high, so many times in the light, so many times in the shadows. As a cycle of life –vis-à-vis with life–, remembrances are memories that also teach us to live, to grow. 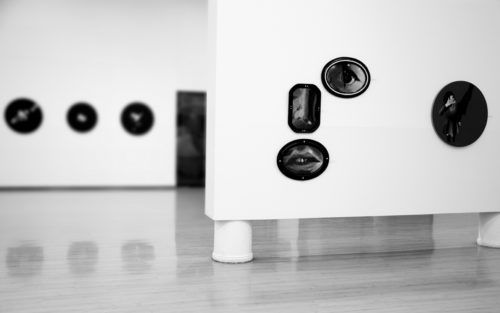 CATALOGS, PUBLICATIONS, AUTHORING, AND OTHERS